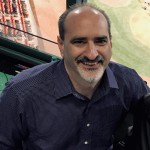 When the Detroit Tigers fully committed to a rebuild of the organization last year, they found a trade partner in the Chicago Cubs.  The Tigers shipped lefty Justin Wilson and Alex Avila to the Cubs for Chicago’s top prospect, Jeimer Candelario and infielder Isaac Paredes.

As a minor leaguer, Candelario showed flashes of power and discipline at the plate.  He also provided the Tigers with an option at third base after Nicholas Castellanos was moved to right field.

To understand Candelario’s background is to understand the passion he bring to game on a nightly basis.

Candelario was born in New York, but moved to the Dominican Republic when he was just five years old.  Jeimer’s father Rogelio opened a baseball academy and he quickly became immersed in the game.  His father, a former Astros minor leaguer, demanded that Jaimer learn to switch hit to further his chances of becoming a major league player.

“Ever since I was really young, my dad taught me to switch hit,” he’s said.  “He told me that if I face a left-handed pitcher I would have a better chance of success if I hit right-handed, so I learned to switch hit at a young age.”

The lessons learned hanging around the academy served Candelario well.  He was  signed by the Chicago Cubs at the tender age of 16 and worked his way through the minor league system before earning his first big league call-up in 2016.  It was symmetry at its best considering Candelario grew up a Cubs fan and followed the careers of Sammy Sosa and Moises Alou.

While on the surface it seemed like a perfect match, getting an opportunity with the Cubs proved daunting.  Blessed with all-star talents like Kris Bryant and Anthony Rizzo, Candelario found himself blocked at the major league level with the Cubs.  When the Tigers traded for his services, he realized that it was an opportunity to play in the big leagues.  An opportunity that was unlikely in Chicago.

While his father has always been a major influence, Jeimer has another friend that has provided valuable guidance.

Growing up, Rogelio Candelario had a close friend named Jose Cano.  Cano had eight children including a son named Robinson.  Robinson Cano has become one of the game’s superstars. He has also been a mentor to Candelario.  Eleven years older than Candelario, Cano has served as a sounding board and off-season hitting partner for his young friend.

“He taught me to stay inside the ball,” Candelario said.  “By doing that, I can hit everything up the middle and hit the ball all over the field.”

Candelario said his goal is to hit the ball between the shortstop and second baseman every at bat.  By doing so, it forces him to stay back and see the pitchers release point better.  It has also taught him to be very disciplined at the plate.  Candelario led the Tigers in walks during spring training and his on- base percentage was over .400 in his September cameo with the Tigers last season.

That discipline has led Tigers skipper Ron Gardenhire to start “Candy” off in the 2-spot in his lineup to start the year.   He is as a good a choice as any.  Base runners ahead of Miguel Cabrera and Castellanos must be a priority in the Tigers lineup.

Moving forward, Candelario appears to be a major part of the Tigers rebuild.  Yet, the acquisition of Paredes who came in the same deal may be equally as important. Paredes is only 19 years old and sill a couple of years away from the big leagues, but the early returns are positive.

Rebuilds are never easy, but if Candelario reaches his potential, the Tigers have a nice piece to their next contending squad.

The Secret to Blaine Hardy’s Revival

These Tigers Have Energy

The 1985 Detroit Tigers: Why They Couldn’t Repeat

Many times in athletics, ascending to the top of the mountain can take a lot out of individual players and a team as a whole. One team very familiar with that exact scenario is the 1985 Detroit Tigers. That team was charged with the monumental task of defending its title in a very competitive American League East.